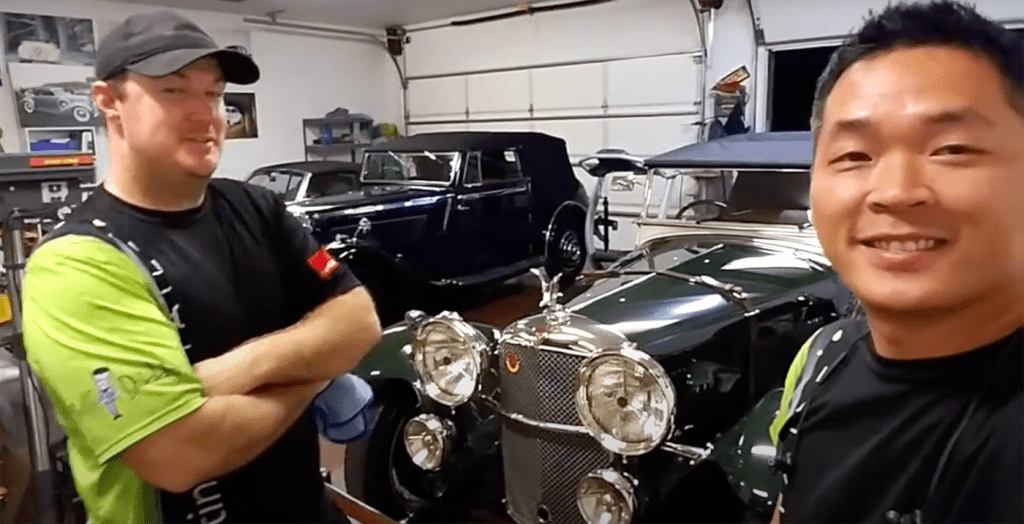 Scott shows off his completed works for The Pebble Beach Concours in this short video for Distinct Detail.  The first car is a rare 1934 Alvis Speed 20 SB. This vehicle is touted as one of the most technologically advanced British cars of its day, having an independent front suspension and also being the first production car to feature an all-synchromesh gearbox.

Also featured in this video is an immaculate 1935 Brough Superior, which Scott boasts “is the only one in the United States.” The George Brough name was legendary in motorcycle circles but it is lesser known that he also built motor cars for a brief period during the 1930s.  The Straight Eight Car is known as the “Bank Robbers Car” as it was a favorite of gangsters John Dillinger and Baby Face Nelson.

Distinct Detail has prepped these cars for The Pebble Beach Concours d’Elegance, which is the flagship of Pebble Beach Automotive Week.  First started in 1950, the Pebble Beach Concours is now considered to be one of the world’s premier celebrations of the automobile. Cars gather at the 18th fairway of the equally historic Pebble Beach Golf Links with judges critiquing cars on their elegance, technical merit, and history. Many other events such as new car concepts and debuts as well as a premier car auction take place during the week within the gates of the famed 17-mile drive.

Scott and his crew at Distinct Detail have burned the midnight oil to make these two amazing vehicles true contenders for the coveted “Best in Show” title which is considered to be the ultimate award for automobiles at the event. Even though the fatigue of long nights and countless hours, Distinct Detail is proud to showcase these truly remarkable, rarest of the rare motor cars in automotive history.

Read this article on Medium!